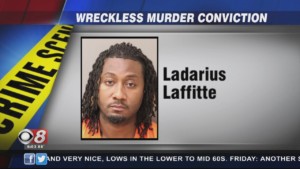 The reckless murder conviction on September 25, 2019 was for the death of Ashley Perkins. Due to Perkins’ parents (Richard Smith and Terri Dawkins) being injured, Lafitte was charged with two counts of first degree assault.

According to evidence, on May 14, 2017, around 10:30 pm, Lafitte hit the victims’ vehicle while drag racing. The crash occurred on Vaughn Road. Police determined that Lafitte was driving 144 MPH two seconds before he struck the vehicle. He split the vehicle in two after colliding with the vehicle.  Perkins was killed and her parents were injured.

Furthermore, evidence at trial indicated that not only was Laffitte driving almost 100 mph over the speed limit, he also did not have his headlights on at the time the incident occurred.

Laffitte was sentenced to 139 years total imprisonment for his three convictions. Laffitte sought to have his convictions reversed on appeal.