Dallas Co. Patrol Cars Get On Board Computers

The Dallas County Sheriff’s Office has a new high-tech crime fighting tool to use — to help protect and serve the public.

Sheriff Mike Granthum says every car in the Dallas County Sheriff’s Office patrol fleet — is now equipped with an onboard computer. 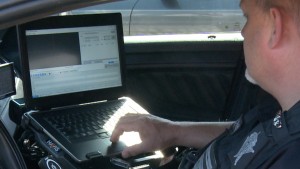 “We have approximately 32 to 35 patrol cars out including our investigators. So, every one of them is equipped with a laptop, a mobile device we call it, and a printer in their car.”

In addition, Granthum says the new computers will actually help improve productivity for the whole department.

“Now, you do e-citations, you write a ticket right on your computer now. It’s going to help the officers tremendously.”

Granthum says deputies are now finishing up their training — on how to use the computers.

“It’s going to get them back on the street a lot faster. You write the report out by hand, it’s time consuming. The more time they spend writing the report, the less time their able to patrol the neighborhoods and the stores.”

The computers were bought at a state surplus auction — for under $5000 dollars.