WARM MONDAY: Today will be quiet with ample sunshine and warm temperatures as highs this afternoon climb into the low and mid 80s across much of the state. After today, the forecast for the week ahead all depends on Zeta in the Gulf and approaching cold front.

ZETA NEARING HURRICANE STRENGTH: Latest update from the NHC: The center of Tropical Storm Zeta was located by a NOAA Hurricane Hunter aircraft near latitude 18.7 North, longitude 84.3 West. Zeta is moving toward the northwest near 9 mph. A northwestward motion with an increase in forward speed is expected over the day or so, followed by a turn toward the north Tuesday night. A faster northward to north-northeastward motion is forecast on Wednesday. On the forecast track, the center of Zeta will move near or over the northern Yucatan Peninsula later today or tonight, move over the southern Gulf of Mexico on Tuesday, and approach the northern Gulf Coast on Wednesday.

Data from a NOAA Hurricane Hunter aircraft indicate that maximum sustained winds have increased to near 70 mph with higher gusts. Strengthening is forecast, and Zeta is expected to become a hurricane later this morning. Additional strengthening is expected before Zeta moves over the Yucatan Peninsula.Tropical-storm-force winds extend outward up to 115 miles from the center. The latest minimum central pressure estimated from NOAA reconnaissance aircraft data is 990 mb (29.24 inches). 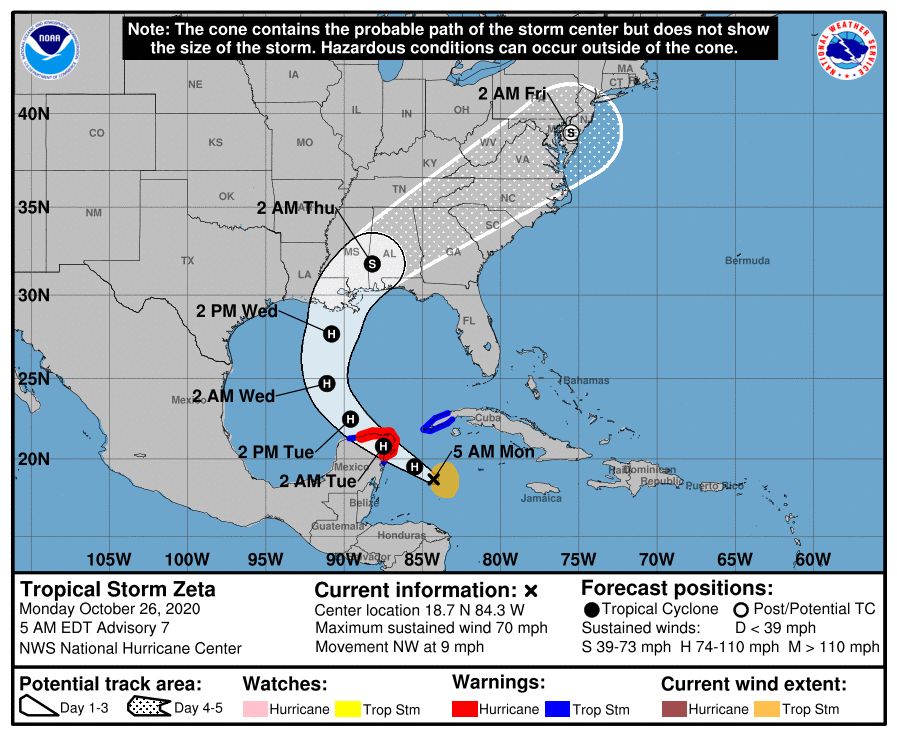 The system will be pulled to the north and then northeast by an approaching trough and front by midweek and should make landfall somewhere along the Northern Gulf Coast late Wednesday. Though the system is expected to be a hurricane in the southern Gulf, cooler waters, below 80 degrees, in the Northern Gulf, will not allow for the system to intensify, and actually the system should be weakening as it approaches the coast as a strong tropical storm or weak hurricane, but nevertheless, a dangerous system to life an property.

FOR US IN ALABAMA: The forecast for now for Wednesday and Thursday will feature clouds and widespread rain and storms, and yes heavy rainfall is possible. For now many locations will see 1-2 inches of rain while, isolated higher amounts if 2-4 inches are possible.

Of course, with any land-falling tropical system, if you are east of the center of circulation, there is a threat for tornadoes, and for now, this threat covers much of South Alabama for Wednesday, Wednesday night, and into Thursday, where the SPC has a “marginal risk” already outlined. 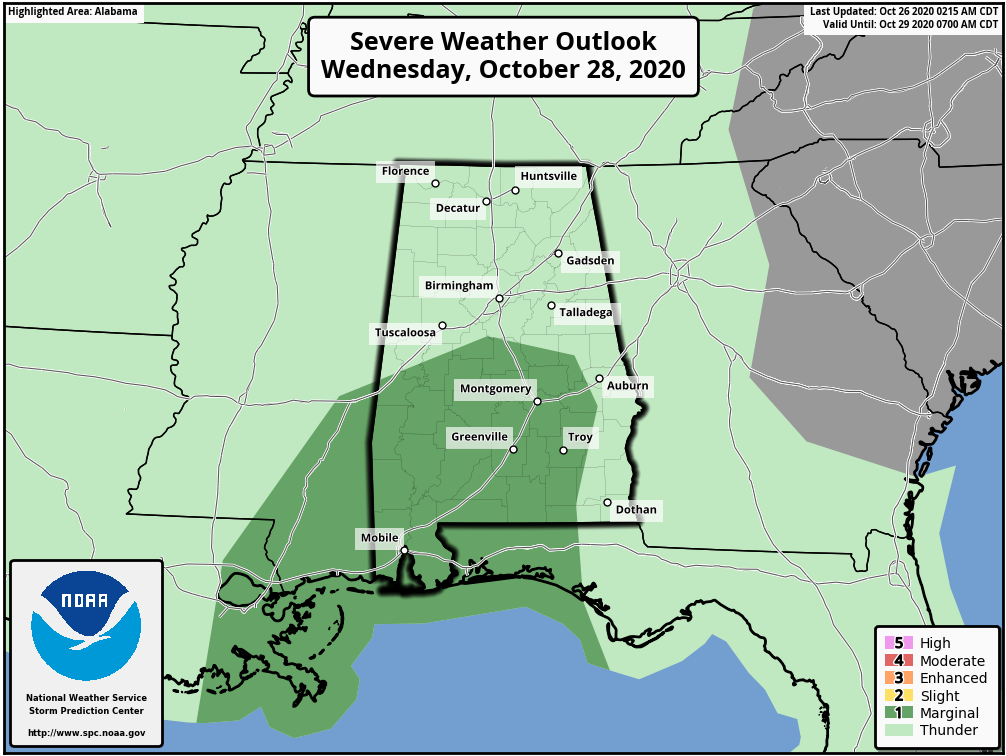 FRIDAY AND THE WEEKEND: As the tropical system exits the region, we are going to see more fall-like weather return to Alabama as a drier and cooler air mass settles back into the state. For Friday and through the weekend, the days should feature ample sunshine, with highs in the lower and mid 70s, while lows fall back into the 50s. Pretty terrific weather for Halloween weekend across all of Alabama. Also, don’t forget, Daylight Saving Times ends this weekend, and we Fall Back onto Standard Time Saturday night.