Our Tuesday will be warm and muggy with more clouds than sun. We should see scattered showers and storms develop this afternoon, and these will last into the overnight hours.

ALL EYES ON ZETA: Zeta made landfall overnight on the Yucatan Peninsula as a hurricane, but has weakened to a strong tropical storm due to interaction with land, but the system will emerge into the Gulf today, regaining hurricane intensity. Latest update from NHC: The center of Tropical Storm Zeta was located over the northern Yucatan Peninsula near latitude 21.0 North, longitude 88.4 West. Zeta is moving toward the northwest near 14 mph, and this general motion is forecast to continue today. Zeta should turn toward the north tonight, and a faster northward to north-northeastward motion is expected on Wednesday. On the forecast track, the center of Zeta will move over the southern Gulf of Mexico later this morning, and over the central Gulf of Mexico tonight. Zeta is forecast to approach the northern Gulf Coast on Wednesday, and make landfall within the hurricane warning area late Wednesday or Wednesday night. 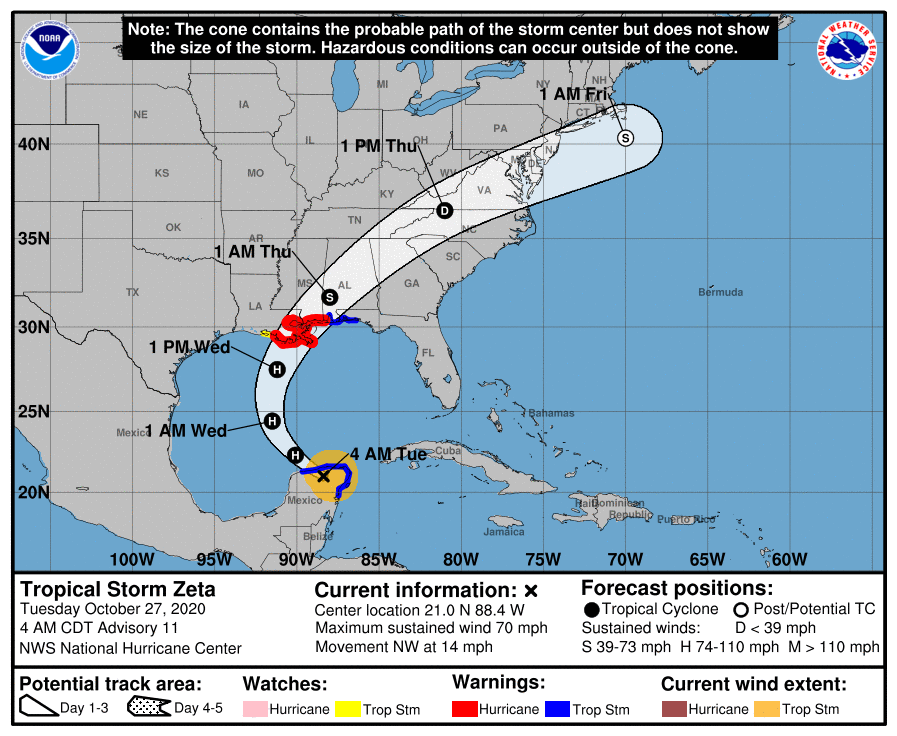 Maximum sustained winds have decreased to near 70 mph with higher gusts. Zeta is forecast to re-strengthen when it moves over the southern Gulf of Mexico later this morning, and become a hurricane again later today. Zeta is forecast to be at or near hurricane strength when it approaches the northern Gulf Coast late Wednesday.Tropical-storm-force winds extend outward up to 140 miles from the center. The estimated minimum central pressure is 984 mb (29.06 inches).

As Zeta moves into the northern Gulf Wednesday, it should not be intensifying due to increasing shear and the cooler waters, but still the NHC is forecasting Zeta to arrive on the Southeast Louisiana coast late Wednesday as a category one hurricane. No matter the strength, this is still a dangerous storm, which will be impacting Alabama.

ALONG THE COAST: A dangerous storm surge will raise water levels by as much as 2 to 4 feet above normal tide levels along the immediate coast in the Tropical Storm Warning area within areas of onshore flow. The combination of a dangerous storm surge and the tide will cause normally dry areas near the coast to be flooded by rising waters moving inland from the shoreline.

Dangerous rip currents are likely on the coast from Gulf Shores to Panama City Beach this week. Winds on the Alabama Gulf Coast Wednesday night could gust as high as 50 mph; sustained winds of 20-40 mph are likely. There is also some risk of brief, isolated waterspouts or tornadoes Wednesday and Wednesday night along the coast. Zeta will be moving quickly, and will limit rain amounts. Rain totals for the coast will be in the 1-3 inch range. Also, some storm surge flooding is possible on the Alabama coast.

INLAND ALABAMA: Rain becomes widespread across Alabama tonight, and Wednesday will be windy and wet day with periods of rain much of the day. Rain continues Wednesday night, and will end from west to east during the day Thursday. The worst of the weather for Central Alabama should come Wednesday night and into Thursday

Rain amounts will also be in the 2-4 inch range for most of inland Alabama, with locally higher amounts possible, perhaps over 4 inches. We are waiting to see if Flash Flood Watches are going to be issued, which are likely because of the expected heavy rainfall. 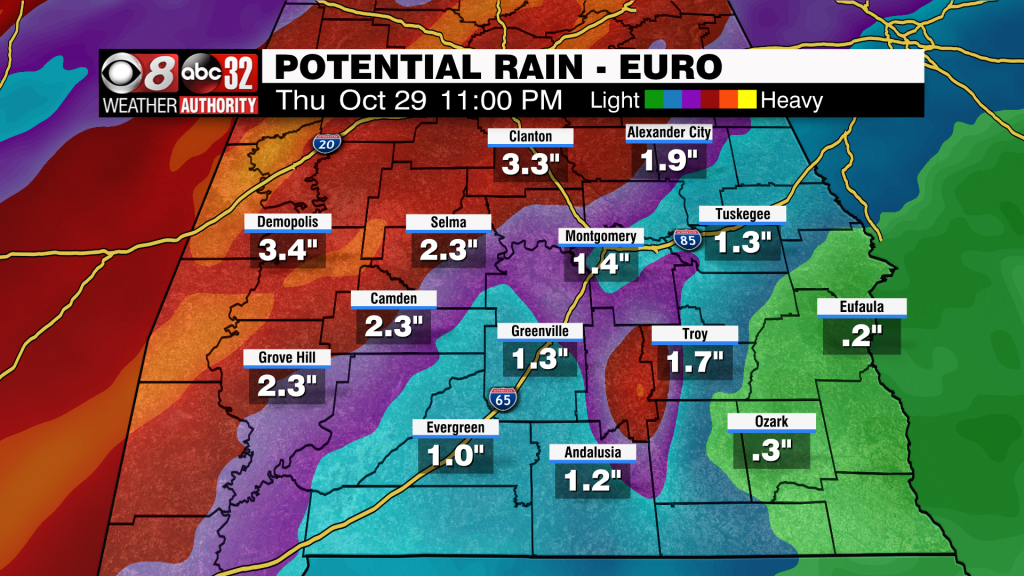 Winds across Central and South Alabama Wednesday night should be sustained 20-40 mph and could gusts over 50 mph, which are tropical storm intensity, and a Tropical Storm Watch has been issued for Central Alabama, with a Tropical Storm Warning in effect for South and Southwest Alabama. 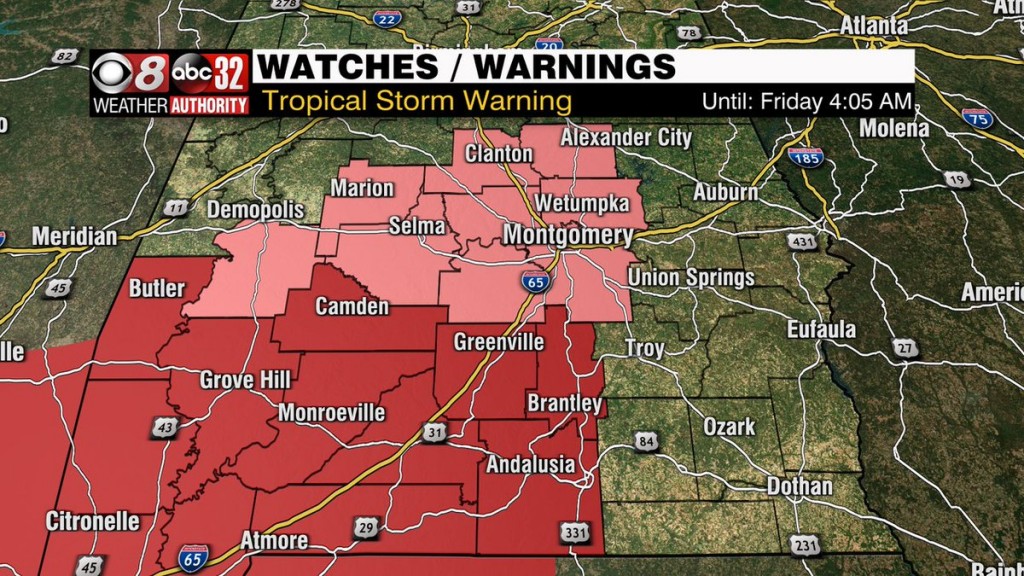 Of course, with any land-falling tropical system, if you are east of the center of circulation, there is a threat for isolated, quick spin-up tornadoes, and this is possible for the southern half of Alabama Wednesday night. 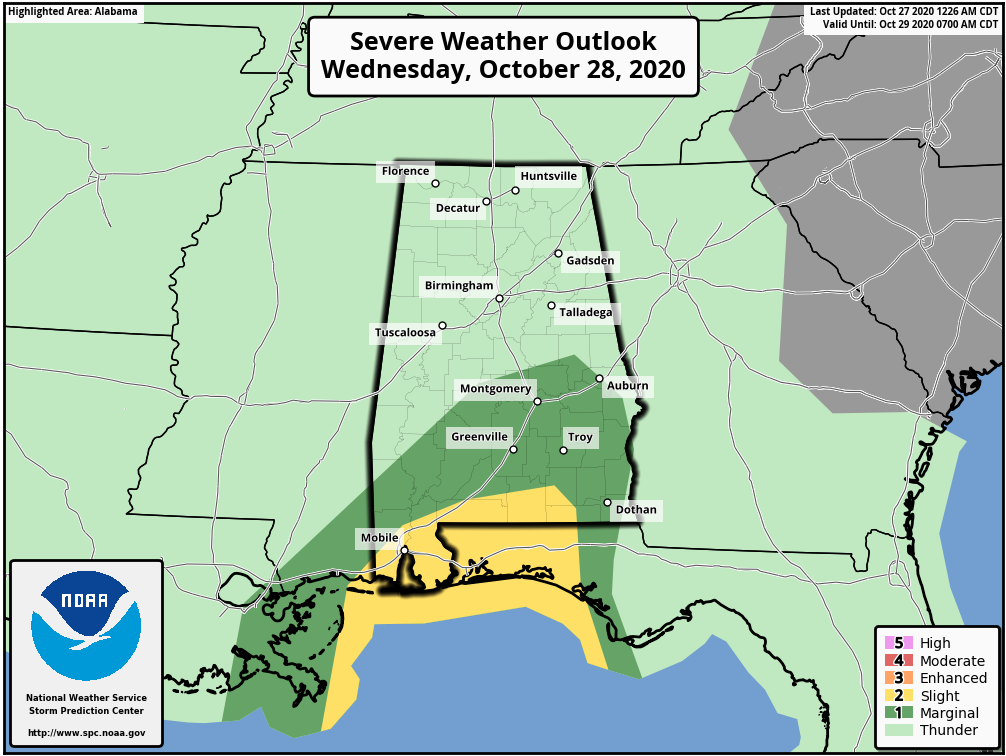 The SPC has this area highlighted in a “marginal risk” for this threat. with the level 2 of 5 “slight risk” across extreme South Alabama and the coastal counties. 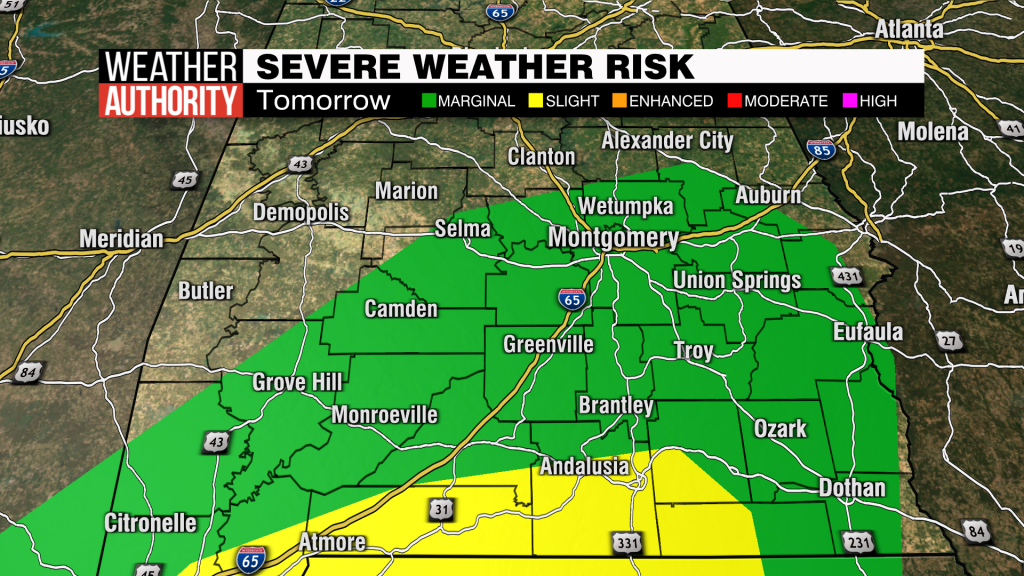 Remember, forecasts with tropical systems can, and probably will change, so keep up with the latest on Zeta as it nears the coast. With so much going on and a constantly changing forecast, the potential for flooding and tornadoes, please make sure you stay informed and safe, and download the Alabama News Network Weather App. 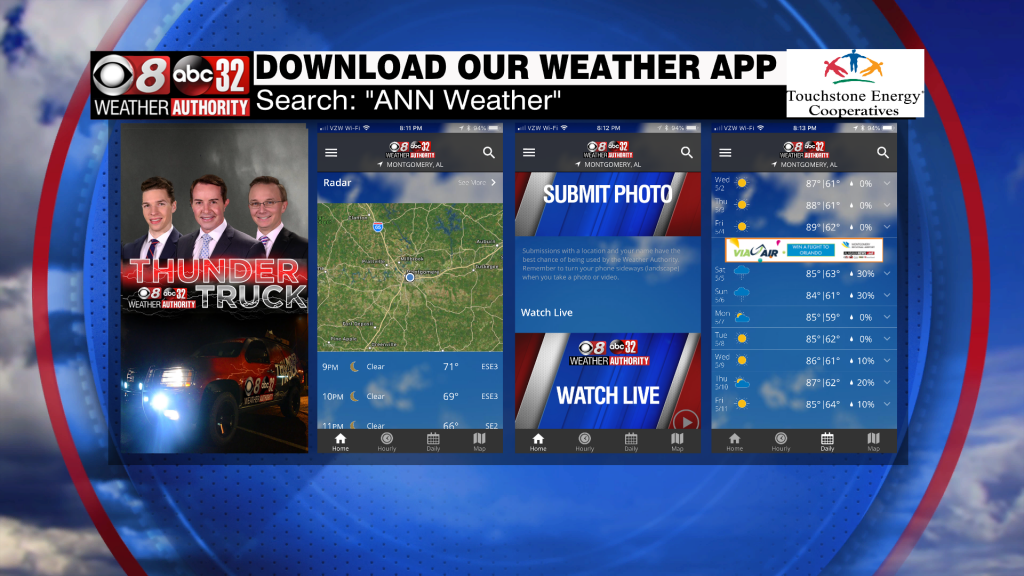 FRIDAY AND THE WEEKEND: Much drier and cooler air rolls into Alabama behind the departing Zeta Thursday nigh, and our Friday promises to be a delightful day with ample sunshine and a high in the low 70s. For the rest of Halloween weekend, we should see more sun than clouds both days with highs over the weekend in the low 70s, with lows in the 48-54 degree range…right at seasonal averages to end October and start November. Also, this weekend, Daylight Saving Time ends, and we Fall Back onto Standard Time Sunday morning. You’ll need to see those clocks back one hour before heading to bed Saturday night.

THE FIRST WEEK OF NOVEMBER: For now most of the week looks dry with temperatures very close to where we should be in early November; highs in the low 70s, with lows in the 40s and 50s.