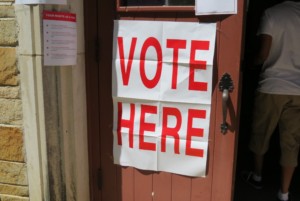 This election, polls show young people are more motivated than ever to vote. According to U.S. Census data, only 46% of young people (18 to 29-year-olds) voted in the last presidential election, far lower than any other age group. But this year, a Harvard poll found 63% of young people say they will “definitely be voting.”

Alyssa Canty does outreach to first-time voters for the non-partisan group Common Cause. “They’re definitely activated, they definitely enjoy, like, voting early, or either voting by mail, so I think we will definitely see decent turnout, but it may not just be, like, on Election Day,” she says.

19-year old Imani Bennett just cast her ballot for the first time. “I’m voting, I’m really making a difference, my voice will be heard,” she says. The sophomore at Spelman College in Georgia says she sees too many important issues to sit on the sidelines. “Democracy protection, voting rights, healthcare is also important because I’m almost, like, an adult in the workforce,” Bennett says.

19-year old Olivia Siebert in Madison, Wisconsin considers voting a responsibility. “My parents raised me that voting is important, and I personally believe that voting is a really important way to exercise your rights within our democracy,” she says.

Young people are choosing between the two oldest candidates to ever lead the Democratic and Republican tickets. Bennett and Siebert both expressed that the youth vote seems overlooked.

“I think that dismissing young people is a big mistake, I think that we have a lot to offer. It will be our turn and our country soon enough,” Siebert says. The new generation of first-time voters are hoping their turnout numbers this election will make history.

The Harvard poll also found that the economy is the number one issue for young voters.