An ol’ familiar face is heading back to the mayor’s office in Selma. James Perkins, Jr. officially takes over as the city’s next mayor on Monday.

Perkins put together a diverse transition team after his election — that’s been assessing the current state of city government. 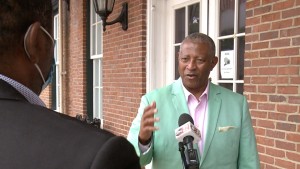 “There are 18 major municipal functions in our city government and from my vantage point all of them seem to be dysfunctional,” Perkins said.  “At this point, it’s not about pointing fingers about who did what and when. It really is about resolving those issues.”

Perkins says the problems the city is facing didn’t happen overnight — and they won’t be solved overnight either. He’s says it’ll take a lot of hard work to fix things in Selma — but he’s up for the job.

“It has taken a while for us to get to where we are. And it’s going to take a while to get us straight,” he said.

“I think the citizens actually elected me because they understood that I have an understanding of the way things are supposed to be.”

Perkins says a better working relationship between the mayor’s office — and the city council — will be essential to successfully address the city’s problems.

“But I’m convinced that the city will begin to see progress, sooner than later.”

He says his new administration will be more inclusive — and more transparent.

Trump Directing His Team to Cooperate on the Biden Transition

Selma Capital Murder Suspect on the Run from Police