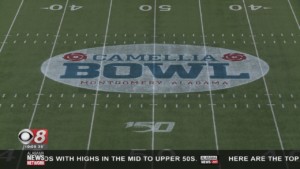 The city of Montgomery will host two college football bowl games this season.

The Montgomery Bowl and Camellia Bowl will both be played at the historic Cramton Bowl.

“In a unique season, we have a unique opportunity to host two bowl games in Montgomery this year,” Camellia Bowl executive director Johnny Williams said. “We have a great relationship with ESPN and we are thankful for the opportunity to continue our bowl tradition during this pandemic season. We had a successful FCS Kickoff Classic in August, and we expect the same with our two bowl games in December.”

The Montgomery Bowl will be played on Wednesday, Dec. 23 with kickoff set for 6 p.m. (CT). The game will be televised by ESPN or ESPN2.

The seventh annual Camellia Bowl will be played on Friday, Dec. 25 with kickoff set for 1:30 p.m. (CT). The game will be televised by ESPN.

“Our partnership with ESPN continues paying dividends and diversifying an already broad array of entertainment and historic assets that bolster our growing tourism industry,” Montgomery Mayor Steven Reed said. “A second bowl game in the River Region is the perfect complement to the Camellia Bowl. Above all, I commend our staff for successfully reimagining how to host primetime events amid a worldwide pandemic and prioritizing the health and safety of the players, staff and limited fans visiting the Cramton Bowl.”

Playing on Christmas Day adds to the excitement of Camellia Bowl, which has had some thrilling games with the first six games decided by 25 total points. All six games were decided in the fourth quarter, with three games decided on the final play.

Ticket information for both the Montgomery Bowl and Camellia Bowl will be announced at a later date.