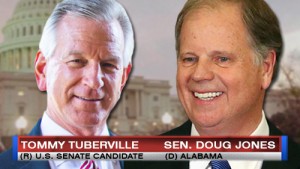 The race pits the incumbent former U.S. attorney against Tuberville, who has made support for President Donald Trump the main pillar of his campaign.

Jones has positioned himself as a moderate and is often called the Senate’s most endangered Democrat. Jones in campaign stops has emphasized his bipartisan voting record.

Tuberville said Sunday that he believed Trump was sent by God.

Former President Barack Obama recorded a robocall that went out Sunday urging voters to get to the polls for Jones.