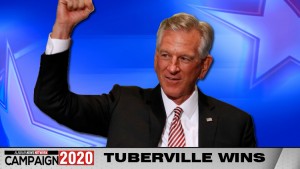 Jones had widely been considered the Senate’s most endangered Democrat.

Republicans had made recapturing the once reliably conservative seat a priority in 2020.

He aligned himself closely with President Donald Trump and declared in the primary campaign that “God sent us Donald Trump.”

Republicans hammered Jones over his vote to convict Trump in the Senate impeachment trial earlier this year.