Power crews have been working around the clock in West Alabama — to restore power knocked out by Hurricane Zeta.

About a week later Hurricane Zeta tore through the state — thousands people in West Alabama — are still without power.

“The majority of those are in Dallas County where we’ve got about 2600 customers,” said Michael K. Jordan with Alabama Power. 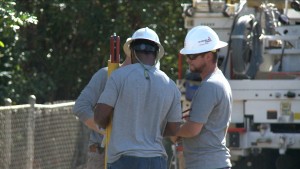 Many of the those affected were at Bloch Park for a drive-thru giveaway — Wednesday morning.

“They don’t have their refrigerators and the food is spoiled,” said Probate Judge Jimmy Nunn.

Zeta caused extensive widespread damage to homes and property throughout West Alabama — as well as the power grid.

“We are seeing damage the equivalent of what we saw during Hurricane Katrina, the April 27th tornadoes just in the extent of damage to our infrastructure,” said Jordan.

“We do have a lot of resources working as quickly and safely as possible to get everyone’s lights back, everyone’s power restored.”