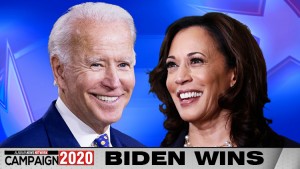 Both networks say Biden has won Pennsylvania’s electoral votes, taking him to 273 electoral votes. That is three more than the 270 needed to secure victory.

Vote  counts continue in several other states which remain too close to call.

Days before he left the White House in 2017, former President Barack Obama surprised Joe Biden with the Presidential Medal of Freedom and said Biden was “the best vice president America’s ever had” and a “lion of American history.”

The tribute marked the presumed end of a long public life that put Biden in the orbit of the Oval Office for 45 years but never allowed the Delaware Democrat to sit behind the Resolute Desk himself.

The Associated Press declared Biden the winner of his native Pennsylvania at 11:25 a.m. EST.  The AP called the race for Biden, who held a 34,243-vote lead after it determined that the remaining ballots left to be counted would not allow Trump to catch up .

Biden held a .51 percentage point margin over Trump late Saturday morning. Under Pennsylvania law, a recount is automatic when the margin between two candidates in a statewide race is less than 0.5 percentage points. Biden’s lead over Trump was on track to stay outside of that margin.