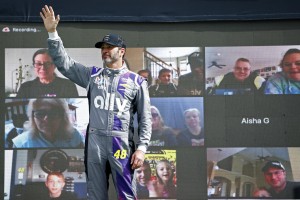 Jimmie Johnson closed out a stellar NASCAR Cup career with a fifth-place finish at Phoenix Raceway in the season finale.

The seven-time Cup champion is heading off to race a partial IndyCar Series schedule and spend more time with his family.

The 45-year-old joined Hall of Famers Richard Petty and Dale Earnhardt was the only drivers to win 7 championships, including a staggering 5 straight.

Johnson celebrated his final race on the track with Hendrick Motorsports teammate Chase Elliott after the 24-year-old won his first Cup season championship.