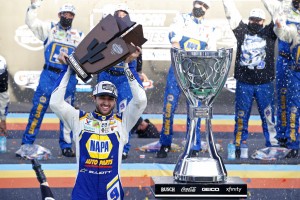 NASCAR’s most popular driver is now a Cup Series champion. Chase Elliott took the torch from teammate Jimmie Johnson by winning his first Cup title, driving from the back of the field to victory lane at Phoenix Raceway.

The win for Hendrick Motorsports and Chevrolet was the first since Johnson, who retired after the race, won his seventh and final crown in 2016.

Elliott’s car failed pre-race inspection and the penalty cost him the pole when he was sent to the rear.

But he raced his way through traffic in the first stage and then took control of the championship.

Olympics Latest: US women perfect so far in beach volleyball