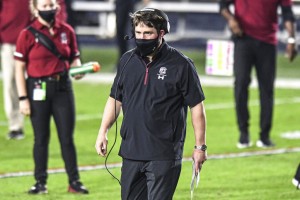 South Carolina coach Will Muschamp heads to check on an injured player during the first half of the team’s NCAA college football game against Mississippi in Oxford, Miss., Saturday, Nov. 14, 2020. (AP Photo/Bruce Newman)

South Carolina has fired football coach Will Muschamp, the second time he’s been let go from a Southeastern Conference program in midseason.

The school said in a release Sunday that Muschamp has been “relieved” of his duties with the football program.

The 49-year-old Muschamp had four years remaining on his contract. His buyout from the school is $13.2 million.

The Gamecocks are 2-5 and lost their third straight game, 59-42, at Ole Miss on Saturday night.

South Carolina beat Auburn 30-22 at home on October 17, but lost to LSU and Texas A&M before the loss to Ole Miss.