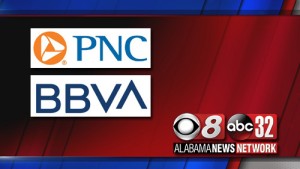 PNC Financial Services Group says it is buying the U.S. subsidiary of Spain’s BBVA bank for $11.6 billion in cash.

BBVA’s U.S. operations are based in Houston, Texas. It has $104 billion in assets and operates 637 branches, mainly in the south and southwest of the country. The bank has a large corporate presence in Birmingham, going back to the days of the old Central Bank and Trust, which later became Compass Bank, then BBVA Compass.

When combined with PNC’s existing footprint, the company will have a coast-to-coast franchise with a presence in 29 of the 30 largest markets in the U.S., PNC said in a statement. It will become the fifth-largest bank in the U.S. by assets.

PNC is based in Pittsburgh, Pennsylvania. In Montgomery, PNC branches were formerly RBC Bank locations after that bank took over some branches of AmSouth Bank following the AmSouth/Regions Bank merger.

A statement from BBVA says the deal should close in mid-2021.  The statement says upon closing, PNC intends to merge BBVA USA Bancshares into PNC with PNC continuing as the surviving entity.

(Copyright 2020 The Associated Press contributed to this report. All rights reserved. This material may not be published, broadcast, rewritten or redistributed.)