Clean Up Effort Continues in Dallas Co. After Hurricane Zeta

Hurricane Zeta tore through West Alabama about three weeks ago — and people in Dallas County are still working to pick up the pieces.

The storm snapped — and up-rooted hundreds of trees — causing major damage throughout the county.

“Some of the houses in town have been ripped apart literally by trees — just crushed through them and done a lot of damage,” said Rickey Shelby. 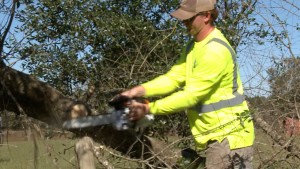 Shelby is the owner of Shelby’s Tree Service, one of only a small handful of tree services — doing business in the area. Shelby says all the work has been somewhat overwhelming.

“Basically just getting trees off of houses, out of driveways, off of cars. And it’s been non-stop 7 days a week from the time of the storm,” Shelby said.

Eighty-five year old Noodie Carroll of Planterville says downed trees damaged a barn and a pick up truck on his property.

“I was lucky because that biggest tree there that was left — it’s aimed at my bed and the house,” Carroll said.

“My grandson lives down the street here. It blew five trees, pecan trees in his front yard — flat — up by the roots.”

EMA officials say the storm damaged about 200 homes. They say half of that damage was caused by fallen trees.