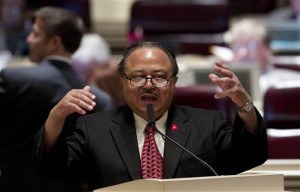 Former Alabama state Rep. Alvin Holmes of Montgomery has died at the age of 81.

Holmes had been the longest-serving member of the Alabama House of Representatives before his defeat in 2018.

State House of Representatives spokesman Clay Redden confirmed Holmes’ death today.  Holmes was one of the first African Americans elected to the Alabama Legislature after the civil rights era and was a fixture for decades at the Alabama State House.

His political career included battles over issues ranging from removing Jim Crow language from the state Constitution to taking the Confederate flag off of the Alabama Capitol. He began serving in the state House in 1974.

“Representative Alvin Holmes was a great Democrat and a fighter,” State Rep. Chris England, the chairman of the Alabama Democratic Party, said in a statement.  “He stood on the front lines of the fight for civil rights and was willing to sacrifice everything in his fight for justice for all.

He not only had a long and distinguished career as a civil rights leader, but also as a member of the legislature, serving his constituents faithfully and dutifully for 44 years.  Alabama has lost a giant, whose wit, intelligence, fearlessness, selfless determination, and leadership will be sorely missed.

My prayers are with his friends, family, and colleagues.”