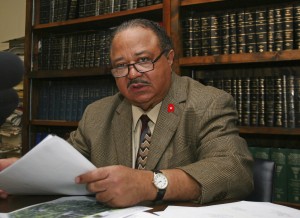 “As an honored alumnus of ASU, Rep. Holmes dedicated his life to being a powerful champion for his district and for the citizens of the state of Alabama. Rep. Holmes was a fighter. As his former colleague in the legislature, I witnessed his passionate representation first hand and always admired his tenacity and strength of purpose. The people of Alabama have lost a dedicated advocate and this University has lost a committed son. Our prayers are with his family.”

Holmes began serving in the Alabama House of Representatives in 1974 as one of the state’s first Black lawmakers and became the longest-serving member of the House until his defeat in 2018.

Holmes led a fight in the 1990s to remove the Confederate battle flag from the dome of the Alabama Capitol. Then-Gov. Jim Folsom in 1993 made a decision that the Confederate flag, which was taken down in 1992 during dome renovations, would not be put back atop the Capitol when those renovations were complete.

"Women in Blue" Join the Fight Against Colon Cancer