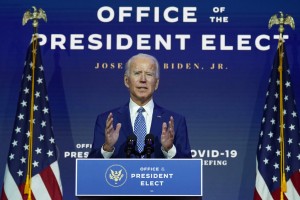 WASHINGTON (AP) – President-elect Joe Biden is preparing to formally announce his national security team to the nation. Those being introduced during a Tuesday afternoon event are among Obama administration alumni whose roles in the upcoming administration signal Biden’s shift away from the Trump administration’s “America First” policies. The picks include former Secretary of State John Kerry to take the lead on combating climate change. Outside the realm of national security and foreign policy, Biden is expected to choose former Fed chair Janet Yellen as the first woman to serve as treasury secretary.