Alabama head football coach Nick Saban has tested positive for COVID-19 and will not coach in Saturday’s Iron Bowl game when the Crimson Tide hosts Auburn in Tuscaloosa. The positive test happened this morning. 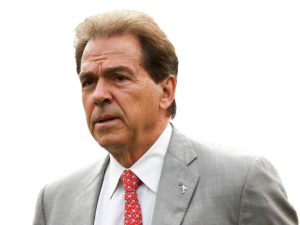 “This morning we received notification that Coach Saban tested positive for COVID-19. He has very mild symptoms, so this test will not be categorized as a potential false positive. He will follow all appropriate guidelines and isolate at home.”

Saban says other than a runny nose, he has no symptoms.

This is the second time this season that Saban has tested positive for COVID-19. He had tested positive before Alabama’s game against Georgia last month.  In that case, Saban showed no symptoms, but Offensive Coordinator Steve Sarkisian was named as the interim coach.

As it turned out, Saban was allowed to coach the game after testing negative three times, indicating the initial test was likely a false positive.

Alabama is the #1 ranked team in the country and is ranked #1 in the College Football Playoff rankings, which were released last night. Auburn is ranked #22.

Stay with Alabama News Network for updates to this story.

City of Montgomery, Montgomery County to Require Masks in All Facilities