Troy Blanks South Alabama 29-0 in Battle for the Belt 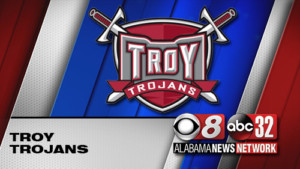 Gunnar Watson threw for 297 yards and three touchdowns while wearing thick pads to protect fractured ribs and Troy blanked South Alabama 29-0 in Mobile to win the “Battle of the Belt” for a third straight time.

Watson threw all three touchdowns in the second quarter — finding Khalil McClain from 15, Kaylon Geiger from 15 and Tray Eafford from 21.

Neither team had won three straight “Battles for the Belt” since the challenge series began nine years ago.

South Alabama was held to 239 yards of offense and never got into the red zone.

Alabama tops Troy in opening round of WNIT