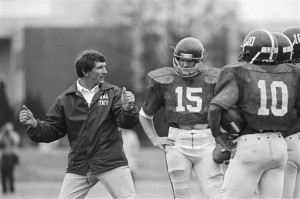 Alabama head coach Ray Perkins explains techniques to his quarterbacks on the first day of spring practice in Tuscaloosa, Ala., March 23, 1983. This is Perkins’ first year as the Crimson Tide’s head coach, replacing the late Paul “Bear” Bryant. With Perkins are Ernest Carroll (15) and Walter Lewis (10). (AP Photo)

The University of Alabama has announced that former head football coach, athletic director and All-American wide receiver Ray Perkins died this morning. He was 79 years old.

Perkins played for Coach Paul “Bear” Bryant as a wide receiver on two national championship squads and three Southeastern Conference championship teams in the 1960s. As a senior, he caught 33 passes for 490 yards and seven touchdowns, earning All-America honors as he capped his final season with 178 yards receiving in the Crimson Tide’s 34-7 Sugar Bowl win over Nebraska.

He went on to be drafted by the Baltimore Colts and played in the NFL for five years, including appearances in Super Bowls III and V. After his playing career, Perkins established himself as a head coach, beginning with the New York Giants from 1979-82.

Perkins succeeded Coach Bryant as Alabama’s head coach and director of athletics, compiling a 32-15-1 record and three bowl victories from 1983-86. He followed that by serving as head coach of the Tampa Bay Buccaneers from 1987-90 and as head coach at Arkansas State in 1992. 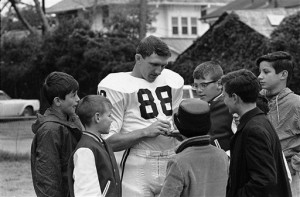 All-America end, Ray Perkins, of Alabama, is the center of attention for a group of youngsters who sought him out for his autograph during the Crimson Tide’s photo session at Tulane Stadium in New Orleans, La., Dec. 30, 1966. The Crimson Tide will face the Nebraska Cornhuskers in the Sugar Bowl on Jan. 2, 1967. (AP Photo)

“Ray Perkins was a great friend and an outstanding football coach who served The University of Alabama with true class and integrity,” current head football coach Nick Saban said in a statement. “Coach Perkins was a great leader who had a tremendous impact on the game of football at all levels. Our thoughts and prayers go out to his wife, Lisa, and his children Tony, Mike, Rachael and Shelby,” he said.

“We are deeply saddened to hear of the passing of Coach Perkins,” athletic director Greg Byrne said. “Just a year ago we were celebrating him as our SEC Football Legend in Atlanta, an honor he was truly deserving of. Coach Perkins served in every possible capacity of Alabama Athletics as an All-American football player, head coach and athletics director, and he will certainly be missed. Our thoughts and prayers are with his wife, Lisa, and children Tony, Mike, Rachael and Shelby, extended family and friends during this time,” he said. 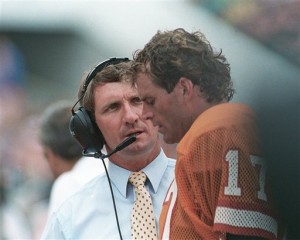 “We extend our deepest sympathies to the family of Ray Perkins. Ray was a great ambassador for The University of Alabama and we will be forever grateful for his impact on the Capstone,” university president Dr. Stuart Bell said.

— Information from the University of Alabama