Report Describes the Benefits and Costs of Expanding Gambling in Alabama

Gov. Kay Ivey’s study group on gambling has released an 876-page report on the impact any expansion of gambling would have on the state. She formed the group in February with former Montgomery Mayor Todd Strange serving as chairman.

Most forms of gambling are illegal in Alabama, even though they are allowed in most other states.

But some gambling does exist in Alabama. That includes pari-mutuel dog and horse race wagering in four counties, charity bingo in 16 counties, bingo on three tracts of land taken into trust by the federal government for the federally-recognized Poarch Creek Indians and betting on fantasy sports statewide.

Gambling issues have been litigated in Alabama courts for decades, and policymakers have attempted to change gambling laws for years. While some changes can be made by the Alabama Legislature, meaningful change would require a vote of the people to approve a constitutional amendment.

Alabama voters rejected a proposed education lottery in 1999, and since then, more than 180 gambling bills have been introduced in the Legislature, 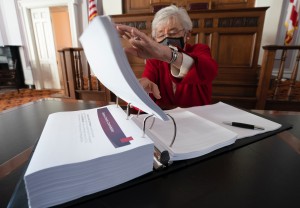 Gov. Kay Ivey reviews the report from her gambling study group – Photo from the Office of Gov. Kay Ivey

all the while gambling litigation continues in the courts.

Should Alabama decide to expand gambling, the report says there are certain benefits and costs.

The report says Alabama could gain 19,000 new jobs, many with salaries much higher than the state’s average annual income, and could realize as much as $710 million in annual revenue:

Most of these costs would result from individuals who develop gambling disorders, which is estimated to be as many as 66,375 people in Alabama, according to the report.

While there are costs associated with gambling, the report says the taxation of regulated gambling activities creates an opportunity to dedicate public funds to gambling treatment, prevention or education services.

Currently, Alabama does not have a dedicated statewide regulatory agency. The report says if the state expands legal gambling, the governing, administering and overseeing of gambling would be a new function of Alabama state government. Given that Alabama would be one of the last states to establish a state lottery and/or otherwise expand legalized gambling, it has the benefit of considering lessons learned and implementing best practices from other states.

The study group says a regulatory entity should be under the control of a Board of Trustees and managed by a chief executive selected by the Board and must maintain independence from political favoritism and outside influence.

The group says meaningful change to Alabama’s gambling policy will likely require action by the Legislature and the Governor and a vote of the people of Alabama to amend the state constitution.

“I offer my sincerest thanks to Mayor Todd Strange and the members of the Study Group for their diligent work, especially for adapting when COVID-19 interrupted in-person meetings,” Gov. Kay Ivey said in a statement.

“After initial discussions with them regarding their report, I believe their research will be pivotal as gambling policies are being considered, debated and potentially voted on. As my team and I pour over the findings, I encourage the Legislature and the people of Alabama to do the same. The potential to act on gambling is an opportunity that cannot be accomplished solely by a governor or solely by the Legislature. It is incumbent on us to work together to provide the citizens of Alabama their opportunity to determine the future of gambling in Alabama.

“I continue to maintain the final say on gambling belongs to the people of our great state, and if and when I have a recommendation regarding a specific course of action, I will do so in full transparency to the people of Alabama, working hand-in-hand with the Alabama Legislature.”