Que Psi Phi Gives Back with Bike Giveaway in Selma

A Selma fraternity gives away more than a dozen bikes to needy children around Selma for Christmas. 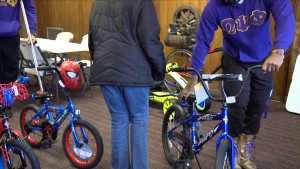 The fraternity raised enough money to buy — and give away — fourteen bikes in all.

Members say the giveaway — was a way to reach out and give back — to the community. Plus, put smiles on the faces of needy children — and ease some of the financial stress some families feel during the holidays.

“This could be a stressful time for some parents,” said Reginald Glover. And it’s not a good feeling as a parent not to be able to fulfill some of the wants of your child. So, we just wanted to kind of lighten that burden if we could on a few families. So that it’s one less thing that the have to be concerned with financially.”

Fraternity members say another reason they chose to give away bikes — is because bikes get kids out of the house — and provide a fun way for them to get some exercise.

Omega Psi Phi Fraternity was founded in 1911 — and has more 750 chapters worldwide.