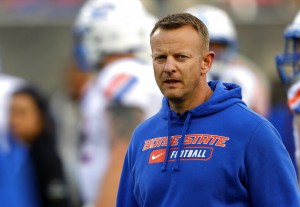 According to CBS Sports and the Associated Press, Auburn has hired Boise State’s Bryan Harsin as its next head football coach.

Auburn and Harsin are finalizing an agreement, a person with knowledge of the situation told The Associated Press. The person spoke on condition of anonymity because negotiations were not complete.

The 44-year-old Harsin is 69-19 with three Mountain West titles in seven seasons at Boise State, his alma mater.

Auburn fired Gus Malzahn earlier this month after eight seasons, a move that cost the school more than $21 million to buy out his contract.

In joining the Tigers, Harsin again follows in the footsteps of Malzahn. He previously took over Arkansas State in 2013 after Malzahn was hired by Auburn.

A native of Boise, Idaho, Harsin spent two years in the Power Five as co-offensive coordinator of Texas from 2011-12. He has never coached in the SEC.

Harsin won approximately 70% of his games or more in all seven seasons leading Boise State. His teams finished in the AP Top 25 and/or played for a bowl game in every season.