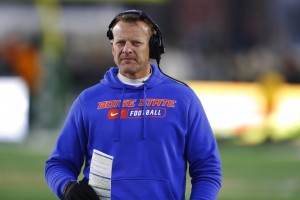 The following is the full announcement from Auburn University on the hiring of Bryan Harsin as the Tigers new head football coach:

A former Boise State quarterback, assistant coach and offensive coordinator, Harsin is 76-24 overall as a head coach – including one season at Arkansas State – and has directed his programs to bowl games each season. His impressive resume at Boise saw him lead the Broncos to five 10-win seasons, seven consecutive bowl appearances and six MWC West Division Championships. This past season he led the program to a 5-2 mark and a trip to the MWC championship game.

In his debut season Harsin led his alma mater back to where it rose to national prominence. Boise State went 12-2 in 2014, winning its first outright Mountain West Championship and capping the campaign with a 38-30 victory over Arizona in the 2014 VIZIO Fiesta Bowl.

The victory in the Fiesta Bowl was the third such win for the Broncos in the previous nine seasons. Harsin, serving as offensive coordinator in the first two Fiesta Bowl victories, has been a part of each of the school’s three appearances in the game.

The team’s victory in the 2014 Mountain West Football Championship marked Boise State’s first outright league title since joining the conference in 2011, and the first overall since 2009. The only alumnus to lead the Broncos as head coach in the history of Boise State, Harsin has won conference championships as a student-athlete, assistant coach and head coach.

Boise State also captured MW titles in 2017 and 2019, giving Harsin three in six seasons. In 2017, the Broncos capped the championship campaign with a 38-28 victory over Oregon in the Las Vegas Bowl. The Broncos concluded the year at 11-3 overall and ranked No. 22 in both the Associated Press and Coaches Polls.

The Broncos went 12-2 in 2019, recording the team’s first perfect 8-0 conference record since joining the MW and earning the school’s fifth all-time appearance in the Las Vegas Bowl. Boise State concluded the season ranked in both the AP (No. 23) and Coaches Polls (No. 22) and were No. 19 in the final rankings of the College Football Playoff Poll, the third-straight season finishing in the top 25 of the CFP.

In 2015, the Broncos went 9-4, climbing as high as No. 20 in both the AP and Coaches Polls. Boise State capped the 2015 campaign with a 55-7 victory over Northern Illinois in the San Diego County Credit Union Poinsettia Bowl, the fifth-largest margin of victory in the history of bowl games. In 2016, Harsin guided the Broncos to a 10-3 record and an appearance in the Motel 6 Cactus Bowl.

In 2018, the Broncos concluded the season ranked in all three major polls – No. 23 in the AP Poll, No. 24 in the Coaches Poll and No. 25 in the CFP Rankings. The Broncos have been ranked in the top 25 in each of Harsin’s six seasons, climbing as high as No. 13 in both the AP and Coaches Polls in 2016, and No. 13 in the Coaches Poll in 2019, Boise State’s highest rankings since finishing eighth and sixth in each, respectively, in 2011.

Boise State went 10-3 in 2018, boasting the Mountain West Offensive Player of the Year in quarterback Brett Rypien – one of 11 All-Mountain West honorees. Rypien concluded his career as the Mountain West’s all-time leader in career 300-yard passing games (21), completions (1,036) and passing yards (13,581). He also ranked second in league history in both wins by a starting quarterback (37) and career attempts (1,619), and tied for second in career touchdown passes (90).

Curtis Weaver made it three-straight MW Player of the Year honors for the Broncos in 2019, following Rypien’s nod in 2018 and Leighton Vander Esch’s Defensive Player of the Year award in 2017. Weaver established the MW career sacks record (34.0) in just three seasons before declaring early for the National Football League Draft, where he extended the Broncos’ streak of consecutive years with an early entrant being selected. Boise State now has seven-consecutive such seasons, one of only nine schools in the country to boast such a distinction. The list also includes Alabama, Clemson, Florida, Florida State, LSU, Penn State, Stanford and Washington.

Vander Esch was a first-round selection of the Dallas Cowboys after foregoing his final season of eligibility. In his rookie season, Vander Esch was named second-team All-Pro by the Associated Press.

The Broncos have won at least 10 games in five of Harsin’s six seasons, giving Boise State 17 since joining what is now known as the Football Bowl Subdivision in 1996. The total ranks second behind only Ohio State during that time.

The Broncos’ six-consecutive bowl appearances under Harsin runs the school’s streak to 18, tied for the nation’s fifth-longest.

Harsin was named head coach, Dec. 11, 2013. A graduate of Capital High School in Boise, he played quarterback for the Broncos from 1995-99. Following his graduation from Boise State with a degree in business management, Harsin coached running backs and receivers at Eastern Oregon in 2000.

The former Bronco letterwinner began his coaching career at Boise State as a graduate assistant in 2001, before taking over the tight ends as a full-time assistant coach from 2002-05. When Chris Petersen was hired as head coach in 2006, Harsin assumed the role of offensive coordinator and quarterbacks coach.

With Harsin on staff, Boise State has won 11 conference championships.

Following the 2010 season, Harsin went to Texas, where he served as co-offensive coordinator from 2011-12. While with the Longhorns, Harsin helped guide the ascension of an offense that ranked 88th in scoring prior to his arrival, to No. 24 nationally in 2012 (36.1).

Harsin then earned his first head coaching opportunity at Arkansas State in 2013, which claimed a share of the Sun Belt Conference championship and a berth in the GoDaddy.com Bowl that season.

Harsin and his wife Kes have two daughters, Devyn Lynn and Dayn Mykena, and a son, Davis.

Auburn Head Coach Bryan Harsin
“I’m incredibly excited and humbled for the opportunity to be at a place like Auburn University. I knew it would take a special opportunity to get me out of Boise and Auburn is exactly that, the chance to compete at the highest level for one of the greatest programs in college football. I have a tremendous amount of respect for the coaches and players in the Southeastern Conference, but am ready to help build a foundation at Auburn where we can consistently compete for championships. I want our program to make Auburn proud both on and off the field with consistent excellence. I’m very grateful to Allen Greene and Dr. Gogue for this opportunity. Kes, our kids and I can’t wait to meet the Auburn family and get to work! War Eagle!”

Auburn Director of Athletics Allen Greene
“We are thrilled to welcome Coach Harsin to the Auburn family. He’s a proven winner whose record speaks for itself. Coach Harsin impressed me with his detailed plan to lead Auburn to consistently compete for championships in the Southeastern Conference. I’m grateful to Gen. Burgess, Quentin Riggins and each member of our advisory committee for their commitment to Auburn during this process. We look forward to welcoming Bryan, Kes and their children to the Plains to introduce them to the Auburn family.”

Auburn President Jay Gogue
“We started the search with two goals. We want a coach who will lead our team to consistently compete at the highest levels and to make Auburn proud on and off the field. We found both in Coach Harsin.

Our search was diligent and thoughtful, and it is unfortunate that so much misinformation was spread in recent days about the process. I appreciate the leadership of Athletics Director Allen Greene and the hard work of members of our search advisory group. Welcome, Coach Harsin, to the Auburn family.”