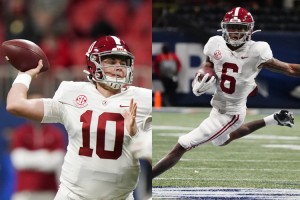 Alabama teammates Mac Jones and DeVonta Smith, along with Clemson’s Trevor Lawrence and Florida’s Kyle Trask, have been named finalists for the Heisman Trophy.

The Heisman will be awarded Jan. 5 during a virtual ceremony as the pandemic forced the cancellation of the usual  trip to New York that for the presentation that usually comes with being a finalist.

Jones and Smith are the eighth set of teammates to be finalists together since the tradition started in 1982.

Smith is trying to become the first wide receiver to win the Heisman since 1991 when Desmond Howard took the award for Michigan.

Running back Najee Harris finished fifth in the Heisman Trophy voting. Harris is a finalist for Doak Walker and Jason Witten Collegiate Man of the Year. The running back leads the nation in total touchdowns (27) and rushing touchdowns (24) along with scoring (162).

Alabama is the second team ever to place three players in the top five of the same Heisman vote, joining 1946 Army with Glenn Davis, Doc Blanchard and Arnold Tucker.

— Other Information from The University of Alabama