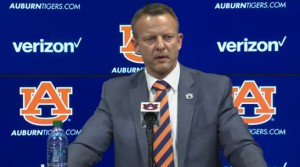 Bryan Harsin was introduced as the new head football coach at Auburn University this afternoon at a news conference that lasted more than an hour.  He, his wife and one of his three children made the cross-country flight from Boise, Idaho, on Christmas Eve to speak to the Auburn faithful.

Harsin takes over the Tigers after Gus Malzahn was fired earlier this month. Auburn finished the regular season at 6-4 and will face Northwestern in the Citrus Bowl with defensive coordinator Kevin Steele as interim head coach.

“We aimed high, and we hit high,” Auburn University President Jay Gogue said at the beginning of the news conference regarding the hiring of Harsin.

While Harsin has not coached or played in the Southeastern Conference, he has had encounters with two people tied to the Auburn football program.  He says five years ago, he found himself sharing space in a swimming pool with Auburn Athletic Director Allen Greene. 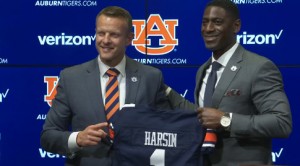 Greene remembers the meeting. “I remember thinking, “I like that guy,'” Greene said at the news conference.

“The dude flat out knows how to win,” Greene said of Harsin.

Harsin says the other chance encounter was with Auburn legend Bo Jackson. Harsin says Jackson happened to be in Boise and agreed to stop by the Boise State University campus to talk with Harsin’s players. Harsin says he thought Jackson would stop by for about 20 minutes, but ended up staying about one hour and 20 minutes, sharing his wisdom.

“It means so much to be standing here as Auburn’s football coach,” Harsin said, saying that the first thing he is about, is about family. Auburn has long made “family” the centerpiece of its athletic approach.

Harsin says he has already connected with current Auburn players in a Zoom meeting. He says he told them that the reason he chose Auburn is probably the same reason they did.

After that, Harsin said it is critically important that he gets the right coaches at Auburn as he works to put together a staff. He says he plans to recruit across the country, including out west where he is most familiar with the talent from his years at Boise State.

When asked about the Iron Bowl rivalry and his thoughts about Alabama head football coach, Nick Saban, Harsin said he understands the rivalry and that Saban has done a tremendous job at Alabama. He says he has much respect for Saban and is looking forward to competing against him.

“I can’t wait to get to work. War Damn Eagle,” Harsin said.