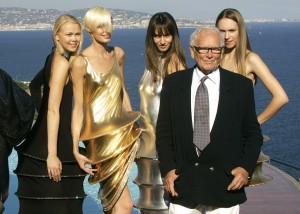 France’s Academy of Fine Arts says Pierre Cardin, the French designer whose Space Age style was among the iconic looks of 20th-century fashion, has died at 98.

A licensing maverick, Cardin’s name embossed thousands of products from wristwatches to bedsheets, making his label among the world’s most famous.

In the brand’s heyday in the 1970s and ’80s, his products were sold at some 100,000 outlets worldwide, though that number dwindled dramatically in later decades.

A savvy businessman, Cardin used his fabulous wealth to snap up top-notch properties in Paris, including the Belle Epoque restaurant Maxim’s.

He was inducted into the Fine Arts Academy in 1992. The academy announced his death in a tweet today.