DeVonta Smith of Alabama is The Associated Press college football player of the year. He is the first wide receiver to win the award since it was established in 1998. Smith received 26 first-place votes and 114 points to finish ahead of his teammate and quarterback, Mac Jones. Jones received nine first-place votes and 67 points. They are the first teammates to finish 1-2 in the voting for AP player of the year. Smith is also the first Alabama player to win the award. Clemson quarterback Trevor Lawrence finished third and Florida quarterback Kyle Trask was fourth. 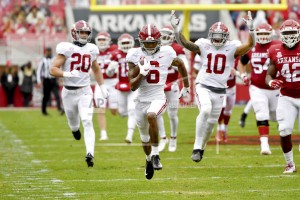 Alabama punt returner DeVonta Smith (6) returns a punt for a touchdown against Arkansas during the first half of an NCAA college football game Saturday, Dec. 12, 2020, in Fayetteville, Ark. (AP Photo/Michael Woods)