Selma Police are looking for a Selma man who’s been missing without a trace — for about a week. 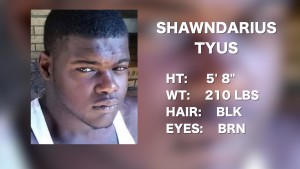 Family members say he usually stays in touch — so when no one heard from him — they got concerned.

“It really had me worried and I got to calling around asking everybody. And every body’s calling me back saying they haven’t heard from him. I’m like, this not Shawn. This just not him,” she said.

The Selma Police Department is investigating.

“We are currently working on leads. We have did some grid searches. And we’re doing every thing we can to try and find him.”

Tyus was last seen walking here in the Selma community, near Highway 80 East and Choctaw Avenue.

“He was headed to my dad house. That’s where he stay — with my Dad. And he was headed there. But never made it.”

Tyus is 5 feet 8 inches tall — weighs 210 lbs — with black hair and brown eyes. He was last seen wearing a camouflage jumpsuit over a white shirt.

Anyone with information that could help investigators find Shawndarious Tyus — call Selma Police at (334) 874-2125 — or Crime Stoppers at 215-STOP.