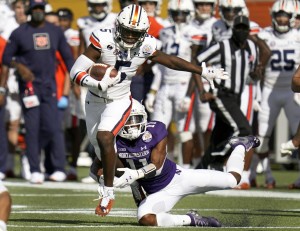 Auburn wide receiver Kobe Hudson, left, makes a move to get past Northwestern defensive back A.J. Hampton, right, during the first half of the Citrus Bowl, Friday, Jan. 1, 2021, in Orlando, Fla. (AP Photo/John Raoux)

Auburn quarterback Bo Nix threw for 292 yards for Auburn but was often frustrated by Northwestern’s defense, which came in allowing 15.5 points per game, ranked fifth in the nation. In the end, Auburn came up short, losing the Citrus Bowl 35-19.

Northwestern quarterback Peyton Ramsey threw three touchdown passes and ran for a score, and No. 14 Northwestern’s defense made it stand for their victory.

Ramaud Chiaokhiao-Brown, John Raine and Riley Lees had touchdown catches for the Wildcats, who bounced back from an ugly loss to Ohio State in the Big Ten championship game.