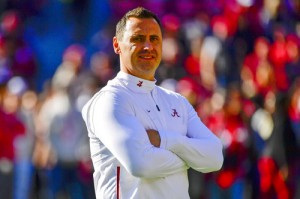 CBS Sports says Sarkisian is expected to coach during Alabama’s National Championship Game with #3 Ohio State on Monday, Jan. 11. The top-ranked Crimson Tide will play in the game after defeating #4 Notre Dame 31-14 in the Rose Bowl yesterday.

Sarkisian has served as offensive coordinator for the last four seasons at Alabama and for the Atlanta Falcons. He spent seven seasons as a head coach in the Pac-12, first at Washington and then USC.

Sarkisian was fired by USC five games into the 2015 season after taking a leave of absence amid a battle with alcoholism.

After completing rehab,  Sarkisian joined Alabama as an offensive analyst and became offensive coordinator role ahead of a National Championship game when Lane Kiffin left Alabama to take the head coaching job at FAU.

Sarkisian had been mentioned by some as a possible successor to Alabama head coach Nick Saban whenever Saban decides to retire. Saban has given no sign that he is thinking of retiring.

Sarkisian will be Texas’ third coach in the last eight seasons. Texas and Alabama will begin a home-and-home football series in 2022.

Oklahoma and Texas To Become Members of the SEC in 2025

Alabama's Primo drafted No. 12 overall, Jones goes in second round

SEC invites Oklahoma and Texas to join league -- in 2025

City of Montgomery, Montgomery County to Require Masks in All Facilities