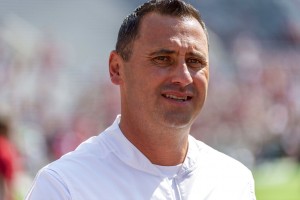 The move comes just a few hours after Texas announced the firing of Tom Herman after four seasons with no Big 12 championships.

Sarkisian is the architect of a Crimson Tide offense that has produced two Heisman Trophy finalists in getting Alabama to the College Football Playoff championship against Ohio State.

He also was 45-36 as head coach at Washington and USC in previous jobs.