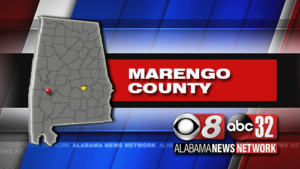 The Marengo County Sheriff’s Office is investigating the county’s first murder of the new year.

About an hour after ringing in the New Year — investigators found themselves working their first homicide of 2021.

Deputies responded to Belmont Road in Dixons Mill at around 1 am News Year’s morning — after getting calls about a body lying in the road.

“During the course of our investigation 33 year old Jonathan Bouler was taken in to custody and arrested for murder.”

Bouler is being held in the Marengo County Detention Center — without bond.

“At this time, the incident is currently under investigation. And we have other persons of interest that we’re looking at,” said Collier.

Robinson’s body has been sent to forensics for an autopsy.

Anyone with information about the shooting call investigators at the Marengo County Sheriff’s Office at (334) 295-4208.