TUSCALOOSA, Ala. – Alabama’s DeVonta Smith is your Heisman winner.  The first receiver to win the award since Michigan’s Desmond Howard in 1991. Smith sits at 105 catches, 1,641 yards and 20 touchdowns on the year. The next closest receiver is 448 yards shy of Smith.

That makes three Heisman winners for Nick Saban and Alabama as Smith joins Mark Ingram(2009) and Derrick Henry(2015). Earlier in the day  Smith had been named winner of the 11th annual Paul Hornung Award as the most versatile player in major college football. 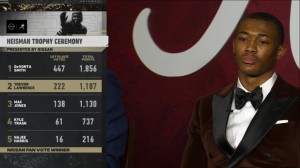 For the first time in 30 years, a wide receiver captured college football’s most prestigious award, the Heisman Memorial Trophy. Senior wide receiver DeVonta Smith was announced as the 86th winner during a virtual presentation in the Naylor Stone Media Suite on Tuesday evening on ESPN.

Smith tallied 1,856 points to surpass fellow teammate quarterback Mac Jones (1,130), along with quarterbacks Trevor Lawrence (1,187) of Clemson and Kyle Trask (737) of Florida. Smith and Jones mark the first pair of Southeastern Conference teammates to be named finalists since multiple candidates were invited to take part in the live show in 1982. Crimson Tide running back Najee Harris (216) finished fifth in the final vote.

“To all the kids out there that’s not the biggest, not the strongest, just keep pushing, because I’m not the biggest; I’ve been doubted a lot just because of my size,” Smith said. “Really, it just comes down to if you put your mind to it, you can do it. No job is too big.”

Awarded since 1935, the Heisman Memorial Trophy annually recognizes the outstanding college football player whose performance best exhibits the pursuit of excellence with integrity. The winners of the trophy epitomize great ability combined with diligence, perseverance, and hard work.