Twenty-two year old Calvin Ferguson, Jr. — 22 year old Joseph Dennis — and 22 year old Jeremiah Dennis — all of Dixons Mills — have been arrested and charged with the attempted murder of a police officer. 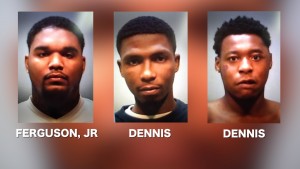 “Once the car came to a complete stop, Officer See exited his vehicle and as he was approaching their vehicle, the vehicle sped off at a high rate of speed,” said Gailes.

Gailes said a high speed chase across county lines ensued — that came to an end in Dixons Mills — when the suspects lost control of their vehicle — and crashed.

“After the vehicle crashed he went to go approach the vehicle. And at that time gunfire was coming from every direction,” said Gailes.

She says the suspects then penned the officer down in a dark wooded area — under a barrage of gunfire.

“He had to lay low and turn his radio off until help arrived because they was still looking for him. Actually, according to him, they was calling him out so they could kill him.” 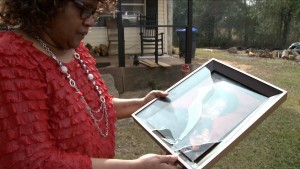 “I was just hearing shooting,” DeWarren said. “It was just like a war.”

DeWarren’s home was shot into — during the incident.

“It went straight through and hit a picture on my entertainment center.”

The three suspects in the case are being held in the Marengo County Detention Center — without bond. The case remains under investigation — and police say more arrests are possible.