The Reaction of Members of Alabama’s Congressional Delegation 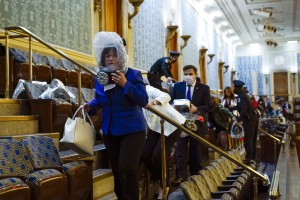 People shelter in the House gallery as protesters try to break into the House Chamber at the U.S. Capitol on Wednesday, Jan. 6, 2021, in Washington. (AP Photo/Andrew Harnik)

Members of Congress, including Alabama’s Congressional delegation, were inside the U.S. Capitol this afternoon when supporters of President Trump entered the building. The members of Congress had been there to ratify the results of the Electoral College vote for president.

That process was halted as senators and representatives were taken to safety.

Some members of Alabama’s Congressional delegation have sent out word via Twitter about what is happening.

Today is a very dark day for our country. I am safe thanks to the protection and swift action by our law enforcement officials. Our Founding Fathers warned against mob rule. Law and order must be established and maintained.

There has been a breach of the Capitol building. We are locked inside the House chamber until Capitol Police allows us to leave. Praying that this chaos dissipates and no one gets hurt 🙏🏾

I am sheltering in a safe location and praying for the safety of our nation, members of Congress, congressional staff, law enforcement, and Capitol Hill residents.

Americans have a right to protest, but violence is never the answer. I’m praying for the safety of my colleagues on both sides of the aisle and the law enforcement protecting us.

Alabama News Network will continue to monitor the reaction of our elected leaders in Washington.