MIAMI GARDENS, Fla. (AP) — No. 1 Alabama has won the national championship game, 52-24 against No. 3 Ohio State. It was the final game of a season played entireply in a pandemic. Alabama went 13-0 as coach Nick Saban won his seventh national championship and sixth as coach of the Crimson Tide, all in the last 12 years. Justin Fields and the banged-up Buckeyes just could not keep up. Smith, the Heisman Trophy winner, had catches for 12 catches for 215 yards and three touchdowns, all in the first half. 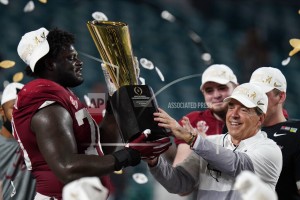