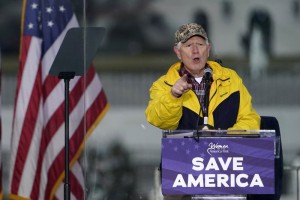 MONTGOMERY, Ala. (AP) – Two House Democrats have proposed that Congress censure U.S. Rep. Mo Brooks, arguing his remarks at a rally of President Donald Trump’s supporters incited the mob that attacked the U.S. Capitol. Brooks said Tuesday that his critics are misrepresenting his remarks. He said those comments were meant to be a pep talk for the next election cycles. At least five people died, including a Capitol Police officer, in the Jan. 6 riot in which Trump supporters overran the Capitol. On Monday, U.S. Representatives Tom Malinowski of New Jersey and Debbie Wasserman Schultz of Florida introduced a resolution for censure, which is a public rebuke by Congress.