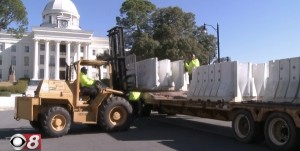 The city of Montgomery says some downtown streets will be closed starting tonight at 6 p.m. as a precaution due to the possibility of protests in state capital cities across the country.

In addition, City of Montgomery offices will be closed to the public Tuesday and Wednesday. Tuesday’s City Council meeting has been canceled. The next meeting will be Tuesday, February 2.

Montgomery County offices will be closed Wednesday only.

“The safety and well-being of our people are always top priorities. In no way do we want to alarm anyone. However, we want people to understand we are being proactive and cautious. We are taking all necessary steps to keep employees and residents safe,” Montgomery County Commission Chairman Elton Dean said in a statement provided to Alabama News Network.

“We appreciate the diligence and dedication of our law enforcement officers,” Montgomery Mayor Steven L. Reed said. “Our goal is to put the health and safety of our employees and our residents first. While hoping for the best, Montgomery is prepared to handle any situation.”

Montgomery Police Chief Ernest Finley says you can expect some closures on Dexter Avenue through January 21. Police suggest that downtown workers avoid the area and work virtually instead, if possible.

“MPD is working with partners at the local, county, state and federal levels to isolate and secure our downtown perimeter. We encourage businesses and organizations located downtown to consider allowing employees to telework as much as possible next week, especially Wednesday. This is a proactive step that will keep employees safe in the event of an emergency, while also helping our officers and partner agencies patrol downtown Montgomery.

We remind anyone living and/or working downtown – or anywhere in Montgomery – that if you see something then say something. MPD is available 24/7. Call 911 to report ANY suspicious activity, even if it’s something that seems small but just doesn’t feel right,” Finley said.

Barricades are being put up around the Alabama Capitol. The FBI says that state capitols, administration buildings and courthouses could be targeted by protesters between now through Inauguration Day on Wednesday, January 20.

Gov. Kay Ivey has announced that at the request of the Chief of The National Guard Bureau, General Daniel R. Hokanson, Alabama will now be sending approximately 750 Soldiers in support of the 59th Presidential Inauguration in Washington, D.C. That represents an additional 500 to the original 250.

The Dannon Project Partners with CREEJ to Provide Help in Lowndes Co.