Cowboys for Trump Leader Arrested Over US Capitol Riot 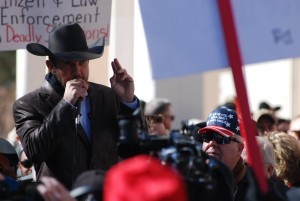 SANTA FE, N.M. (AP) – A New Mexico county official who runs a group called Cowboys for Trump and who had vowed to return to Washington after last week’s riot at the U.S. Capitol to place a flag on House Speaker Nancy Pelosi’s desk has been arrested by the FBI. Otero County Commissioner Couy Griffin was arrested Sunday on charges of illegally entering the U.S. Capitol. Griffin did not immediately respond to phone or text messages seeking comment. On Thursday, Griffin said he planned to travel with firearms to Washington, D.C., for Biden’s inauguration.