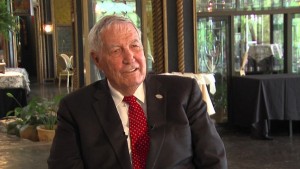 Former Alabama Football Coach Gene Stallings shared his take on making it in the NFL (abc3340.com)

TUSCALOOSA, Ala. (AP) – A former University of Alabama football player is running for mayor of Tuscaloosa. Former Crimson Tide coach Gene Stallings joined Martin Houston as the one-time running back announced his campaign for mayor on Thursday.

Stallings, who lives in Texas but came to Tuscaloosa for the event, says it was his “pure joy” to speak on behalf of Houston. Houston was the first challenger to announce a bid against Mayor Walk Maddox, who is seeking a fifth term in the nonpartisan election on March 2. Maddox lost a Democratic bid for governor in 2018.