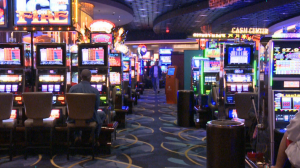 ATHENS, Ala. (AP) – Authorities say that more than 60 gambling machines and $11,000 in cash have been seized during raids on illegal betting operations. The Limestone County Sheriff’s Office said Sunday that investigators recovered the machines and cash near Athens on Saturday. The agency said that 69-year-old Judy Wilson has been charged with promoting gambling, and warrants are being obtained for the owner of a second operation. Authorities said the sheriff’s office served a warning to two establishments last year notifying them their business operations violated the law. Both businesses ceased their operations for a time before resuming, and the sheriff’s office conducted the raids after receiving new complaints.