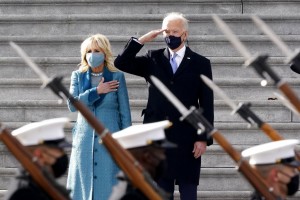 President Joe Biden and his wife Jill Biden watch a military pass in review ceremony on the East Front of the Capitol at the conclusion of the inauguration ceremonies, in Washington, Wednesday, Jan. 20, 2021. (AP Photo/J. Scott Applewhite)

Members of Alabama’s Congressional delegation are using Twitter to react to the inauguration of Joe Biden as the 46th president of the United States. Among Alabama’s seven U.S. representatives and two U.S. senators, 7th District U.S. Rep. Terri Sewell is the lone Democrat.

Here is a sampling of tweets from the Republican members of Congress from Alabama, including from Barry Moore, the new Congressman from the Second Congressional District, representing parts of our area:

Today, our nation embraces the peaceful transition of power & what unites us as Americans.

For the good of the country & the Alabamians I proudly represent, I joined several of my colleagues in agreeing to find common ground, where possible, with the Biden Administration. (1/2) pic.twitter.com/TwCsth6uM9

Congratulations to our 46th @POTUS, Joe Biden, and @VP, Kamala Harris. I wish them all the best as they lead our country over the next four years. Thank you to the @USNationalGuard and other law enforcement for securing and protecting our Capitol for this important ceremony.

🇺🇸 Grateful to have been joined by my son for the Inauguration of President Biden and Vice President Harris. pic.twitter.com/fPnvR7PX6D