A pair of suspected thieves are behind bars in Dallas County. They’re accused of breaking into a Dollar General store — and stealing hundreds of dollars in merchandise. 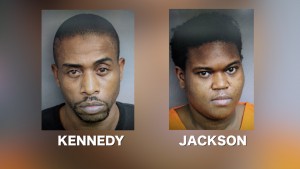 Forty year old Derrick Kennedy of Camden — and 30 year old Jerrica Jackson of Selma — are each charged with burglary.

The duo is suspected of breaking into the Dollar General store in Burnsville — at around 2:30 Thursday morning.

Surveillance video shows two people breaking into the store — then running out with arms full of merchandise — and loading it into their car.

“We put out a BOLO for that vehicle. Be on the look-out — for that particular vehicle,” said Sheriff Mike Granthum.

A deputy spotted the vehicle at the Dollar General store in Valley Grande at around 8:30 Thursday night. Kennedy and Jackson were in the vehicle and both were arrested.

Granthum said Kennedy was already wanted for a previous burglary at another Dollar General. His bond was set at $30,000 dollars.