On Wednesday January 27, the Troy Police Department arrested Reco Dynell Harris, 19, of Troy. He is charged with Discharging a Firearm into an Occupied Dwelling. The arrest was made in connection with a shooting that occurred on Saturday, January 23. 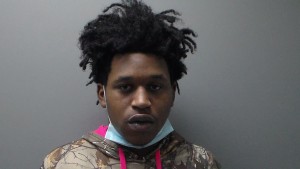 On Saturday, January 23, around 1:30pm, the Troy Police Department responded to the 800 Block of North Three Notch on the report of a shooting. At the scene, officers saw that several vehicles and a residence had been shot into.

After a further investigation into the offense, Detectives where able to obtain a felony warrant on Harris for Discharging a Firearm into an Occupied Dwelling.

In the early morning hours of Wednesday January 27, the US Marshal Gulf Coast Fugitive Task Force along with the Troy Police Department and Pike County Sheriffs Department arrested Harris at a residence in the 2900 Block of County Road 2214.

This case is still under investigation by the Troy Police Department.