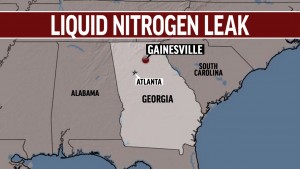 A liquid nitrogen leak at a poultry plant in Gainesville, Georgia, has killed six people, with multiple others taken to the hospital.

At least three of those injured at the Prime Pak Foods plant in Gainesville were reported in critical condition.

Poultry plants rely on refrigeration systems that can include liquid nitrogen.

Firefighters, the U.S. Occupational Safety and Health Administration and the state fire marshal were investigating the cause of the leak.

A spokesperson for Northeast Georgia Health System said five people died at the plant and one person died in the emergency room. At least four firefighters were also injured and take to the Gainesville hospital with respiratory complaints.