On November 16, 2020, police found Coon suffered from a gunshot wound. He died at the scene.

Earlier this month on Friday, January 8, police arrested Brittany Head, 22, of Andalusia and charged her with one count of Murder. Police also charged her with once count of Burglary. She is in Covington County  jail on a $1.15 Million bond. A search ensued for Jenkins and Porter shortly after. 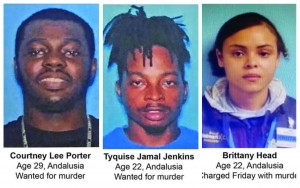 On Thursday, January 28, Andalusia police received a tip that Porter and Jenkins were possibly hiding out at a residence on Whatley Street. The Andalusia Police Department, assisted by the U.S. Marshal’s Task Force, and the Covington County Drug Task Force, located Jenkins and Porter at 508 Whatley Street around 5:30 am. Both men were taken into custody. 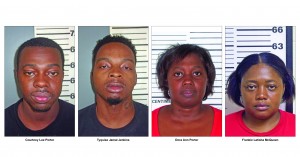 Dora Ann Porter, 57, and Frankie Latisha McQueen, 42, the grandmother and mother of Porter, also were charged Thursday. Porter was charged with two counts of hindering prosecution, which carried a $100,000 bond. McQueen was charged with one count of hindering prosecution and one count of obstructing a criminal investigation, charges which also carried a $100,000 bond. The charges are Class C felonies.

The murder investigation continues, and additional arrests could be made.