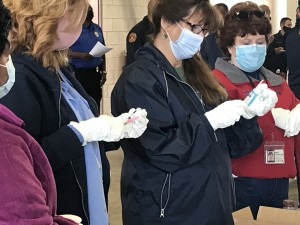 The City of Montgomery says Saturday’s vaccination clinic was a success, with 1,100 doses provided.

The clinic was held at the old Montgomery Mall for people in the 1A+ group, which included first responders, health care workers and those 75 years old and older.

It had been expected that 1,000 doses would be given out, but the city says that the clinic was able to administer 11 doses per vial, instead of the expected 10. That allowed for an additional 100 doses.

Montgomery Mayor Steven Reed told Alabama News Network at the clinic that more clinics will be held and will be more spread out in the hopes that the lines won’t be as long.